“Live Like You’re Going to Have a Long, Happy Life.” 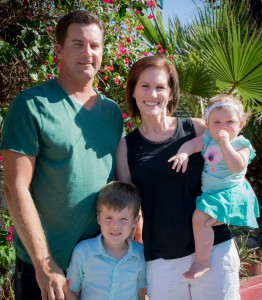 Wendi Davenport learned she had Stage 2 breast cancer that had spread to the lymph nodes. She also learned that she could take steps to protect her chances for having children after cancer treatment. Wendi’s surgical oncologist informed her of options that she didn’t know existed—freezing eggs and/or embryos and placing her ovaries into a temporary menopausal state.

She had chemotherapy then a bilateral dissection mastectomy and a program of maintenance drugs.

“During that time I luckily had a female surgical oncologist who was in her childbearing years. She knew how important it was to protect my chances for having children one day. Doctors need to understand that there are a lot of aspects of a person’s life, including fertility, and if possible you should do everything you can to salvage it.”

An oncologist’s job is to keep patients alive, says Wendi, but you need to make decisions. “They will tell you ‘you don’t need stress.’ But I was so lucky to have a surgical oncologist that felt my pain and counseled me on fertility preservation.”

She chose to “put her ovaries to sleep,” taking a fertility drug called Lupron.

After four years in remission, the Davenports were ready to have a baby and the doctors gave them the “all clear.” Dr. Carey Cullinane referred Wendi to USC Fertility and Dr. Karine Chung, who suggested that she consider freezing her embryos as part of a long-term fertility plan.

“I knew that if the cancer came back, it would be way worse. Just to be safe, I decided to freeze embryos in 2008 to have something in my back pocket.”

The team at USC Fertility guided the Davenports through the embryo cryopreservation; then, with Dr. Chung coaching them on optimizing natural fertility, Wendi got pregnant the first month she tried. The couple had a little boy named Luke.

“We thought everything was wonderful; we probably were not going to need our frozen embryos.”

What she thought was a kick-boxing injury causing back spasms, chest pain and numbness in her arm, turned out to be metastasized and widespread cancer in her liver, lung, bones and lymph nodes. In 2011, Wendi started a course of brutal chemo and radiation. She says: “It wrecked my ovaries. They were toast.”

Doctors told the Davenports that Wendi could never have more children, but once back in remission, Wendi started to look for a surrogate and contacted USC Fertility again for help.

At this point Wendi learned that remission drugs for her cancer don’t transcend through blood-brain barriers. She now had mets appear in her brain.

Recurring cancer was not the only barrier that Wendi faced.

Wendi’s husband Scott said no to pursuing surrogacy with frozen embryos. “He said ‘I can’t trust that you will stay in remission.’ But after a year of counseling, we both came to agree that we can’t live waiting for me to die. We have to live the way we would live without cancer. Plus, what if something happened to us? We didn’t want our Luke to be alone. We wanted a sibling for him.”

Dr. Chung worked with Wendi’s oncologist throughout the process, addressing all of their concerns about fertility preservation and surrogacy.

“Dr. Chung is fabulous,” says Wendi. “She could understand how badly I wanted this, but would gently remind me that sometimes [the outcome] is out of our control. She kept us informed every step of the way, even helping address my husband’s concerns during the surrogacy process. She was always kind and empathetic.”

The Davenport’s friend who was to serve as surrogate got pregnant with her own child, so Wendi went to Facebook with an appeal. A parent of one of the students Scott coached at Cal State Dominguez Hills stepped up.

“She is the mother of five and we couldn’t have asked for a more perfect surrogate. She is still involved with family celebrations and we are working on coming up with a special name, like mom but different, that represents how special she is to us.”

After two rounds of IVF failed, the third try had Wendi resigned to find peace even if they never had another child. Her final two frozen embryos transferred and one successfully implanted.

Dr. Chung referred the Davenports to an obgyn who is experienced in surrogacy birth, with an office across from USC Fertility.

“I was like the dad throughout this pregnancy,” recalls Wendi. “I went to all of the doctor appointments and held her hand.”

She felt scared about her daughter not having the same connection with her right from birth. “When I was pregnant with my son, I sang to him and talked to him. With this surrogacy pregnancy, I was trying to bond, but only got to be there some of the time.”

Devin came after a natural birth and Wendi says it was intense. “I had a c-section, 15 surgeries, chemo and radiation but this was something else! I cried like a baby when she was born.”

Wendi’s fears were unfounded. “She knew who her mommy was right away.”

“Live Like You’re Going to Have a Long, Happy Life.”

Before her breast cancer diagnosis, it didn’t occur to Wendi that chemo and radiation could cause infertility.

“You never know what is going to happen,” she says. “Once you find cancer, your doctor does not want to wait. I’m so grateful to my medical oncologist for telling me about fertility preservation. Otherwise, I would not have been able to have another child. I can’t imagine going through cancer only to learn that I can’t have a family.”

Wendi says she has met too many women in the chemotherapy room that weren’t told about fertility preservation and now are sterile. “It’s heartbreaking,” she says. “Children add so much joy to your life.”

Today Luke is in Kindergarten and Devin is learning to walk. She turns one in November and her brother crawls into her crib to play with his sister most mornings. Wendi loves to watch them on the baby monitor.

Every three weeks, Wendi drives two hours roundtrip for infusion therapy. Luke and Devin give her the extra push she needs to keep going, to keep fighting.