Whereas the male produces sperm on a daily basis, women ovulate only once during a particular ovulation cycle. It is only during this relatively short time period (the ovulated egg must be fertilized within 24 hours or it will die) that successful conception may occur. The ensuing two weeks are spent waiting and wondering whether implantation has or has not been successful.

It is for this reason that we refer to pregnancy success rates according to the probability that conception will occur during any one “cycle”. All fertility treatment revolves around such cycles as well. A typical treatment cycle involves enhancing the three basic phases of reproduction – ovulation, fertilization, and implantation – to optimize possibility for conception.

During natural conception, several eggs begin to grown in both ovaries around the time that a woman begins menstruating. Each egg grows inside of a structure called a “follicle”.

A follicle basically looks like a small blister, about 3 to 4 mm in size, nestled on the surface of the ovary, containing follicular fluid and a tiny cell the size of a small grain of sand, which is the “oocyte”, or egg. The egg is to the follicle as a seed is to a fruit. As a result of natural hormone secretion (the body stimulates the ovary with a hormone called follicle stimulating hormone (FSH)), only one follicle is selected for ovulation and the rest are reabsorbed by the ovaries. The selected follicle grows to be about 20 mm in diameter, or about the size of a large grape. This process takes about two weeks and culminates in ovulation.

The body triggers ovulation by releasing a hormone called luteinizing hormone, or LH. This hormone is readily measured in the urine some 12 to 24 hours prior to the release of the egg. Commercially available ovulation detection kits are based on the measurement of LH. During ovulation, the follicle ruptures, releasing the fluid which is contained inside and thus freeing the egg.

The egg is picked up by one of the two fallopian tubes (women are born with two fallopian tubes, but you only need one). The egg now feels its own biological clock ticking: it must be fertilized within the next 24 hours or it will die.

Fortunately, sperm survive for two or more days in the cervical mucus and therefore, precise timing of intercourse is not necessary. Sexual intercourse every one to two days is perfectly adequate to replenish the sperm supply in the female reproductive tract. However, if insemination is performed as part of a treatment cycle, the cervical mucus is bypassed and the insemination should be timed within 24 hours of ovulation.

If the sperm are successful in fertilizing the egg, the resulting “zygote” undergoes a series of cell divisions. As the embryo moves down the fallopian tube toward the uterus, each cell divides every 14 to 18 hours. Since the embryo is confined within the human eggshell, called the “zona pellucida”, the cells become progressively smaller and smaller with each cell division.

The embryo reaches the uterus about five days after ovulation. The embryo now has between 50 and 100 cells and is called a “blastocyst”. It must now expand and hatch through its eggshell so that the cells within it may grow into the wall of the uterus and thus implant. The process can be likened to that of a chicken hatching from its egg or to that of a seed germinating and putting out roots after being planted. The embryonic cells that grow into the wall of the uterus continue to replicate. They make a hormone called human chorionic gonadotropin (HCG) and this is the hormone that is measured in the blood or the urine to ascertain that a woman has successfully conceived.

Once implantation is established, most of the time everything turns out fine. We do still have to contend with miscarriages, which do occur, with a probability that depends on several factors, including the age of the woman (older women have more miscarriages). The best way to see if the pregnancy is doing well is to follow HCG levels in the blood during the first two weeks after implantation, and observe the pregnancy by ultrasound after that. A fetal heartbeat can be seen by ultrasound between six and seven weeks of gestational age, which means four to five weeks after ovulation. The ovary continues to make hormones (estrogen and progesterone) to support the pregnancy until the end of the first trimester (about 13 weeks). After that, the pregnancy is capable of supporting itself. 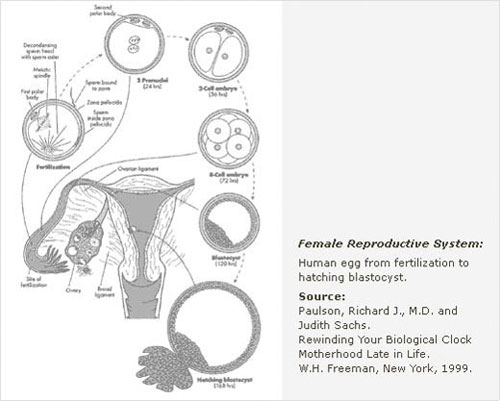