On the 24th of February I was thrilled to be a part of CureTalks, an online radio program with a mission to heal the world through information, discussion and sharing of knowledge. 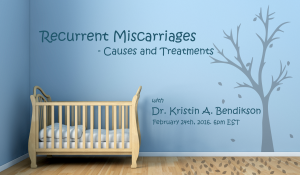 It was an amazing experience to share my knowledge about miscarriage with a larger audience. Miscarriages occur in approximately 15-20% of all pregnancies, so they are more common than people think.  People are unaware of how often miscarriages occur, because often times it is something that a woman keeps private and doesn’t share with even with her closest friends.

In my practice I see a lot of both fertile and infertile women who have suffered from a miscarriage or multiple miscarriages.   In my consultations with these women I find that they focus on three things they want me to answer for them.

This is too much to cover in a short blog so today I am just going  discuss miscarriages as a result of chromosomal abnormalities, which is the most common cause of miscarriage.

Unlike sperm that are constantly created in men, all the eggs a woman will ever have are present in her body from before the time she was born.  Therefore, as women ages her eggs age, just like any other cell in her body.  As the eggs age, they are more likely to have a mechanical failure as they develop which leads to the egg  contributing too much or too little genetic material to the embryo, meaning duplicates or an incomplete set of chromosomes.  Therefore, that embryo will end up having an abnormal amount of genetic material, which we call a chromosomal abnormality.  The chance of miscarriage in any woman is greatly impacted by her age, the older a woman gets the more likely it is for her to miscarry.  The risk of a single miscarriage is only 15% in a 35 year old, however by the age of 40 it increases to at least 30%, and by 45 the chance of miscarriage is >60%.

IVF can also be used to treat miscarriages caused by chromosomal abnormalities.  By screening the embryos to make sure they have the correct number of chromosomes, in a process called Preimplanation Genetic Screening, we can avoid transferring back chromosomally abnormal embryos and therefore greatly diminish the chance of miscarriage.

In extreme cases when the egg quality of a woman is very poor, an egg donor can be used to help the couple have a baby.   For most women who have suffered a miscarriage, it doesn’t come to that.

It is important for women, even with one miscarriage, to meet with their obstetrician or a fertility specialist, so that they can review the woman’s medical history and lifestyle and make sure there isn’t something obvious that needs to be addressed at that time that could impact the next pregnancy.

The best news is that even without treatment the chance of having a healthy baby in the next pregnancy is very high.  So if you have a miscarriage. Don’t give up, don’t lose hope.

Listen to the program here.