Fertility Specialist, Richard Paulson MD is Board Certified in Reproductive Endocrinology and Infertility 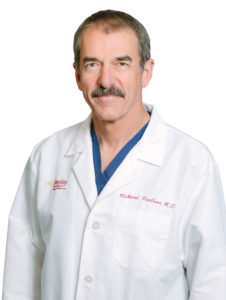 Dr. Richard Paulson is the Director of USC Fertility, and has been with the practice since 1986. He is also a Professor of Obstetrics and Gynecology and Chief of the Division of Reproductive Endocrinology and Infertility at the University of Southern California Keck School of Medicine.

Dr. Paulson has been rated one of “The Best Doctors in America” continuously since 1994. He has published several landmark investigations addressing the effect of age upon female fertility, including the first observation that egg donation could be used to extend the reproductive lifespan in women over 40.

He received his specialty training in Obstetrics and Gynecology at the Harbor-UCLA Medical Center and subspecialty training in Reproductive Endocrinology and Infertility at the University of Southern California School of Medicine, where he joined the full-time faculty in 1986.

Dr. Paulson’s commitment to quality patient care and his research have been recognized and awarded by the media, universities, professional societies, and related-industry.

Dr. Paulson at ASRM - How USC Leads the Nation in Research and Advancements in Genetic Testing of Embryos

Dr. Paulson Talks About Mosicism in Embryos and How it Can Affect Preimplantation Genetic Testing Results.